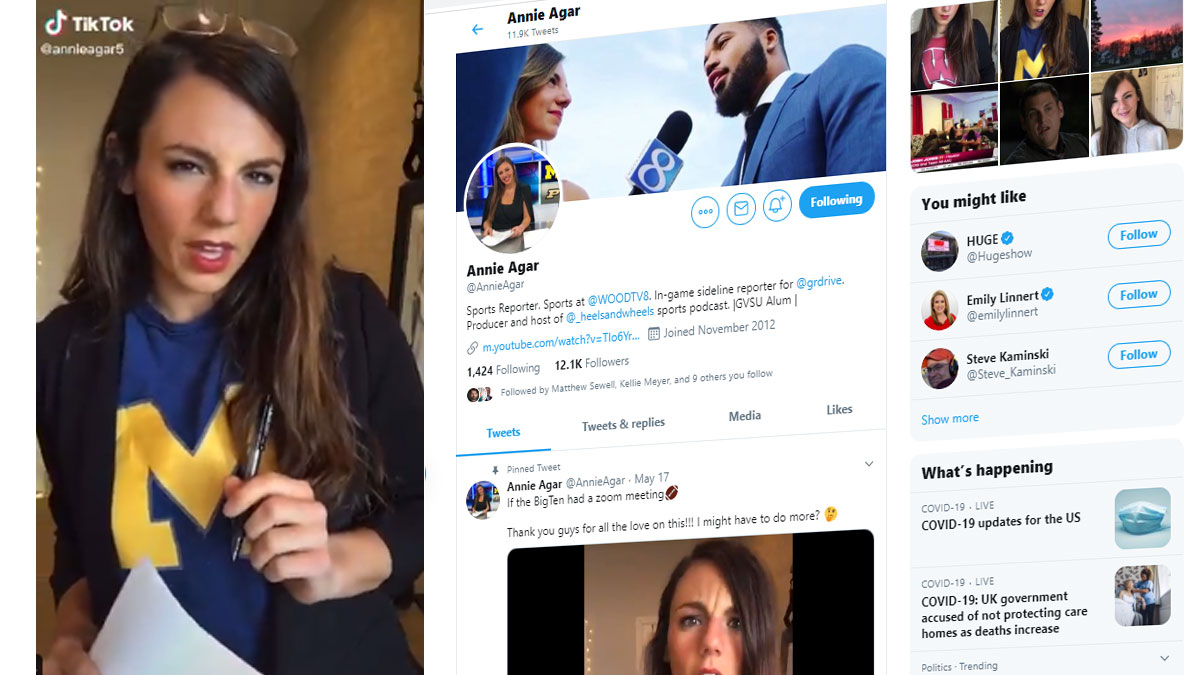 How do you create content as a sports journalist when there’s no sports to be found? Experiment and take chances.

For WOOD-TV contributor Annie Agar, a risk generated reward in the form of more than 2 million views, new followers on multiple platforms and a huge boost to her brand. And it all boils down to a little comedy.

Agar created a mock Zoom conference call for the schools in the Big 10. Armed with an idea and some colorful shirts with print-out logos, her hilarious clip garnered reaction from football broadcasting stars Rich Eisen, Desmond Howard and Kirk Herbstreit. It was a risk that took 45 minutes to produce on her iPhone.

“I knew I wanted something different – something sports fans could relate to during this time,” Agar said. “The idea came from my own work experience — obviously everyone in the sports world is thinking about what is to come this next football season and the changes that will be made because of this quarantine. This, combined with the fact that the only form of communication we have might now is Zoom, made me put the two together.”

But this isn’t necessarily an idea that came overnight. Agar says she spent a lot of time watching other videos to see how they perform and drive engagement. She uses those to decide the type of content she’ll produce.

“For every video I put out, I spent double the amount of time just watching the content others put out: what I thought was funny, what I thought could be funny with a tweak here and there and what I saw go viral,” she added.

A quick glance around Annie’s social media channels shows she has a pretty clear strategy for the different platforms. What you see on Twitter isn’t what you’ll get on Instagram and what you’ll see on TikTok isn’t the same content you’ll find on YouTube.

“By watching the content on a specific platform, you will get a feel for what content belongs where — and that is the angle I love to play with every social media platform,” Agar said. “Viewers are more likely to view content, I’ve come to realize, when you follow the visual ‘rules’ of each social media platform.”

While the Big 10 Zoom call caught the attention of major brands like Barstool on Twitter, it started on TikTok. Agar says she’s been experimenting with that platform to find her niche and its editing tools were ideal for a project like this. Because of the success of her video on TikTok (some 200k views), a user recorded the video and brought it over to Twitter. That’s where the clip generated another 2 million views.

“I think it is so important to take chances on posts and content. Trial and error is really how I came upon this idea,” added Agar.

Agar says this all started with an NFL video she did about Joe Burrow on TikTok. She saw some success and looked at ways to replicate that in the future. Agar looked to connect her content to an emotion. What do people miss most about sports right now? Competitive college rivalries. That’s when she started drawing up plans for this project.

Personally, when I think of things I might post, I often stop at, “what if I do all this and it falls flat? What if it gets no response?” For me, that’s sometimes that barrier to actually producing and posting the content.

What would Agar’s advice to people like me be? She’d probably tell me to quit being wimp…

“I didn’t really fear failing because my goal was never to go viral, the goal with every video I have put out is to reach enough people that I feel like I’ve made a difference,” Agar said. “Fear of ‘not being funny enough’ or ‘not putting out the right content’ is only going to lead to you never knowing what that unique quality is that can impact others through social media. There is no failing, only learning.”

And if you ask me, that’s some pretty sound advice coming from a 24-year-old.

Agar says she plans to continue learning, adapting and creating.

“I still have so much to learn social media wise but I think that is the fun part: figuring out what others desire that aligns with something you can give them content wise,” Agar added. “That is where the best social media relationships start.”

And don’t think Agar isn’t already planning her next content project. What will it be? Be sure you’re following to find out!